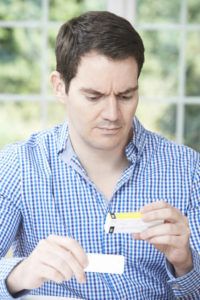 One of the most common questions associated with sildenafil (Viagra) and other PDE5 inhibitors is how long does it last?

The simple answer is usually around 4 hours, with the maximum effect between 30 mins and 2.5 hours after taking – see graph below. However several factors will have an effect on how quickly the drug is absorbed and expelled from the bloodstream.

The following timeline has been collated from several studies:

As soon as a potential patient thinks of taking medicine for erectile dysfunction, these practical questions come into play:

Though specific questions or concerns should always be discussed with a doctor, it never hurts to be informed about any medicine you are thinking of taking.

Who should take sildenafil?

Men experiencing erectile dysfunction should speak to their doctor to determine the cause. It can be the side effect of certain medications, or caused by neurological disorders or psychological factors, but can also be caused by diabetes, being overweight, high blood pressure, or high cholesterol. Furthermore, as one ages, many medical conditions that cause ED become more commonplace.

The first step is to determine and treat the underlying cause of erectile dysfunction, and sildenafil can then be taken on its own or as part of a broader treatment plan. Men who are not taking nitrate-based medication, do not have untreated high or low blood pressure, retinitis pigmentosa, or recent myocardial infarction, or angina, are considered acceptable candidates for taking sildenafil.

What is in sildenafil?

Generic sildenafil contains the active ingredient sildenafil citrate. It is a PDE5 inhibitor that works by facilitating blood flow to the penis, and is sold under generic manufacturer names, such as Mylan sildenafil, Actavis sildenafil, and Torrent sildenafil (as well as Pfizer’s brand name Viagra). The molecule produced by different brands is exactly the same from one to another, therefore sildenafil is always metabolised in the same way. It is considered a low toxicity drug and is generally well tolerated by most men.

Further information on brands of sildenafil and generic medicines FAQs.

When should you take sildenafil?

Sildenafil should be taken approximately 40 minutes before sexual intercourse, and two hours after a meal. It should be noted that sexual stimulation is required for an erection to occur, and some patients may not respond to the starting dose of 50mg, in which case their doctor may increase the dosage.

How long does sildenafil last?

Sildenafil (Viagra) is one of the shorter-acting PDE5 inhibitors, with a duration of action of about four hours (it’s ‘half life‘), and has the desired effect only if the patient is also sexually aroused. After around 24 hours none of the active ingredient remains in the bodies plasma.

Those seeking a longer-acting tablet may benefit from Spedra (avanafil), Levitra (vardenafil), or Cialis (tadalafil), the latter of which has a duration of up to 36 hours and is often referred to as the weekend pill.

Sildenafil’s short duration does make it a good starting ED medicine for many patients – it gives patients and doctors a chance to begin with a low dosage and monitor any side effects. If present, side effects from taking sildenafil are usually mild and may include:

Though it is rare, patients are advised to seek medical attention immediately if they experience any signs of an allergic reaction such as swelling of the face, lips, tongue, or throat, difficulty breathing, or hives. Reactions such as pain, tingling, or numbness of the face, neck, chest, or jaw are also considered serious side effects and cause to seek emergency medical attention, as is a prolonged erection lasting more than 4 hours (priapism).

The graph below demonstrates the study data of the bioavailability of sildenafil 100mg taken with and without food over 12 hours. If taken without food the maximum drug concentration in the blood is shown at 1 hour post-dose. If taken with food this is delayed to 2 hours. 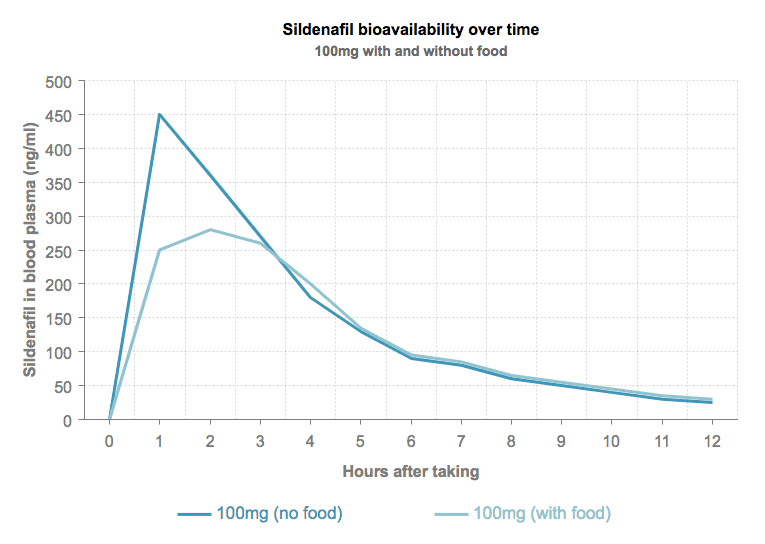