Most men with erectile dysfunction take tablets known medically as PDE5 inhibitors. These include Viagra/sildenafil, Cialis/tadalafil, or Levitra/vardenafil. However there are some less familiar treatments, including some less well known PDE5 inhibitors tablets and a medicine known as alprostadil. Alprostadil comes as cream, insertable pellet or injection and works directly on the penis. END_OF_DOCUMENT_TOKEN_TO_BE_REPLACED 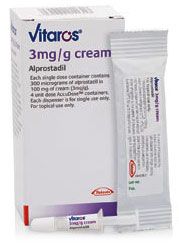 A cream which treats erectile dysfunction (ED) is now available on prescription in the UK.

The cream – called Vitaros – now gives hope to the 2.3 million men over 18 across the country who currently try to deal with the problem by taking a variety of other treatments, such as Viagra (sildenafil).

Vitaros cream is available in a single-use, disposable applicator. A pre-prescribed amount is applied to the tip of the penis and, once absorbed, claims to yield an erection within five to 30 minutes.

The cream, which contains the drug alprostadil, means that men in the UK are the first in the world to have access to this new form of treatment to combat their sexual dysfunction issues.

Vitaros cream must be kept refrigerated and is unsuitable for mail order without specialist packaging to keep the medicine cooled. END_OF_DOCUMENT_TOKEN_TO_BE_REPLACED