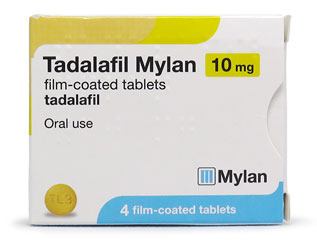 How to order Tadalafil online for UK delivery:

Who can use tadalafil?

Tadalafil is suitable for adult men diagnosed with erectile dysfunction - the inability to get or maintain an erection firm enough for sex. Tadalafil has been shown to significantly improve the ability of obtaining a hard erect penis suitable for sexual activity.

Tadalafil, like other erectile dysfunction tablet treatments such as Viagra (sildenafil), Levitra (vardenafil), and Spedra (avanafil), works by helping the blood vessels in your penis to relax, allowing the flow of blood into your penis during sexual stimulation.

These medicines achieve this effect by blocking an enzyme called PDE5 - they are 'PDE5 inhibitors'. They have very little effect on other parts of the body.

Tadalafil is sometimes known as the weekend pill. This reflects its prolonged duration of action - up to 36 hours. A tablet taken on Friday night will still be active on Sunday morning.

This long duration of action, compared with 4 hours for Viagra (sildenafil) and Spedra (avanafil), and 4-5 hours for Levitra (vardenafil), has led to tadalafil becoming increasingly popular.

For further information read How long does tadalafil last?

How to take tadalafil for erectile dysfunction

Tadalafil tablets come in four strengths: 2.5mg, 5mg, 10mg, and 20mg. Most men take a 10mg or 20mg tablet when they need it. The lower doses of 2.5mg and 5mg are for daily use, although some men may find a single 5mg tablet taken on an occasional basis is all they need.

Recommended starting dose for most men taking tadalafil for the first time.

Taking tadalafil for the first time

The normal starting dose is a single 10mg tablet taken at least 30 minutes before sexual activity. Swallow tablets whole with water and can be taken with or without food.

Sexual stimulation is required for tadalafil to be effective.

Repeated trials of treatment at one dose are recommended before changing to a higher strength tablet. There is no benefit in taking a higher dose than is needed. Tadalafil should not be taken at the same time as, or within 24 hours of, taking other oral erectile dysfunction treatments.

Most men take tadalafil as and when they need it at least 30 mins before anticipated sexual activity.

A single tablet of tadalafil 10mg or 20mg remains active for up to 36 hours. Men usually take a tablet 'as required' when they expect to be sexually active in the following 36 hours. The maximum dose is 20mg in a 24 hour period. 10mg-20mg is not recommended for continuous daily use.

Men who require treatment twice weekly or more on a regular basis may prefer to take a 2.5mg or 5mg low dose tablet every day. Tadalafil (and branded Cialis) is the only type of ED tablet with a low-dose daily regime.

The recommended dose is 5mg taken once a day at approximately the same time of day. The dose may be decreased to 2.5mg daily based on individual tolerability. The low dose daily tablets provide treatment on a continuous basis, although it may take several days to build-up to an effective dose.

Men should consult their regular doctors before starting on regular daily treatment.

No dose adjustments are recommended in elderly or diabetic patients.

It is not known if tadalafil is effective in patients who have had pelvic surgery or removal of all or part of the prostate gland.

Read patient reviews of tadalafil below.

Who should NOT take tadalafil

All men with erectile dysfunction should consult a doctor face-to-face before obtaining supplies online. Dr Fox consultations check for contraindications and interactions with other medicines, but do not replace an initial consultation and diagnosis with your regular doctor where physical examination and tests can be carried out.

Sexual activity carries a possible risk to patients with heart disease because it puts an extra strain on your heart.

Do not take tadalafil if you:

If you have any of the following conditions you should discuss with your regular doctor before taking tadalafil:

Tadalafil and other medicines

Tadalafil should not be taken if on the following medication:

If in doubt please message our doctors or consult your regular doctor before ordering tadalafil online.

Possible side effects of tadalafil

The most common side effect is a bluish or yellowish tinge to vision. This is not dangerous and fades as the tablets wear off. A similar visual discolouration is common with other erectile dysfunction treatments.

A very rare but serious side effect is priapism - a continuous painful erection over a period of hours. Priapism can lead to permanent damage to the penis and is a medical emergency requiring urgent medical attention through a hospital A&E department.

The manufacturer's patient leaflet included in packs contains a full list of side effects.

Not all men need a tablet that works for up to 36 hours. Other oral PDE5 treatments include Viagra (sildenafil), Levitra (vardenafil), and Spedra (avanafil) which typically last 4 hours.

Other treatments for ED include topical applications, injections into the penis, and surgical devices. Counselling may help if psychological causes are causing ED. Improved diet and lifestyle choices can also help.

Generic tadalafil became legally available in the UK in November 2017, after the exclusive license of the pharmaceutical company Lilly for branded Cialis ended. Cialis is the brand name used by Lilly for its original brand of the medicine tadalafil. Tadalafil is the medical name. They are the same medicine.

Generic medicines are medically identical to branded originals and are usually cheaper.

Diabetes, high cholesterol, low testosterone, low or high thyroid hormone, obesity, and reduced blood circulation can all contribute to erectile dysfunction. Erectile dysfunction can be associated with heart disease and stroke. Treatment of the underlying causes may improve symptoms and prevent associated disease.

Erectile dysfunction can be caused by stress, psychosexual problems, and lifestyle choices such as smoking, heavy drinking, obesity, and lack of exercise. Symptoms may well improve when these issues are addressed. Other causes may include spinal injury or operations on the prostate or bowel. Regular cycling for 3 or more hours a day may also contribute to ED.

It is important to have a face-to-face consultation with a GP, particularly if erectile dysfunction has started recently or is worsening. GPs will undertake an assessment, possibly perform tests, and provide advice.

Yes. Keeping it simple, tadalafil lasts for 36 hours and sometimes longer, and has the longest duration of action of all the PDE5 inhibitors. This compares for example to sildenafil (Viagra) which lasts for around 4 hours.

Like all PDE5 inhibitors, tadalafil requires sexual stimulation to work - ie: you only get an erection when you want to during the 36 hours.

The graph below demonstrates the study data of the bioavailability over 96 hours of a single dose of tadalafil 20mg. Tadalafil levels are still around 100µg/l even 36 hours post dose. 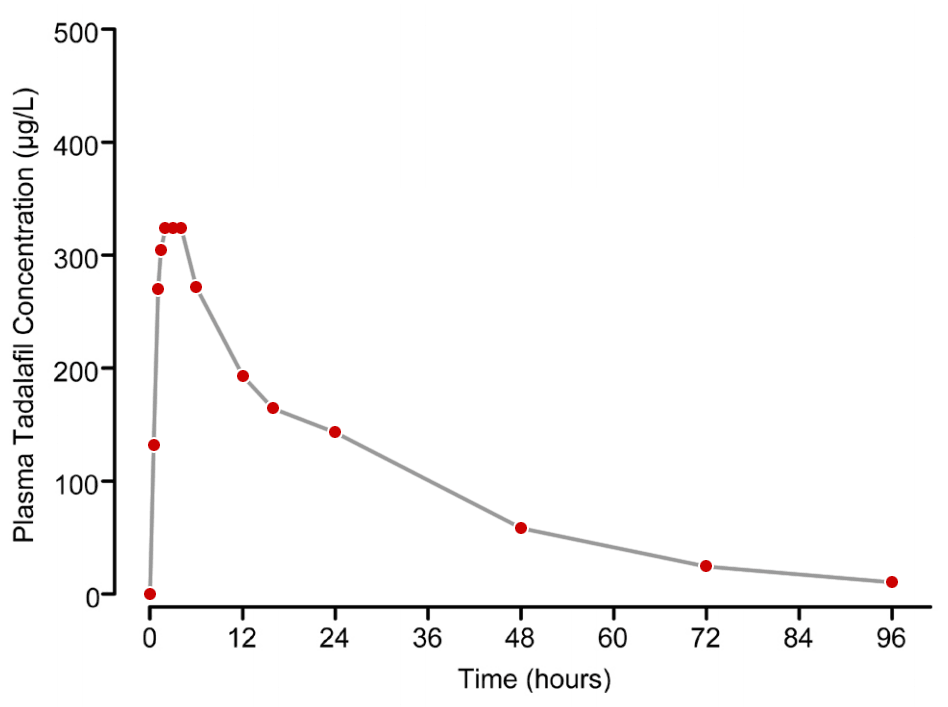 Is tadalafil available on the NHS?

Tadalafil is available on the NHS for men with erectile dysfunction for certain conditions that are causing their symptoms such as MS or a spinal injury.

Can tadalafil tablets be split?

Why is generic tadalafil so much cheaper than original Cialis?

When a pharmaceutical company develops a medicine it incurs research, testing, and licensing costs. In return an exclusive marketing license is given, which usually lasts about 15 years. During this period no other drug companies can legally supply the same medicine and the original developer is free to set the price as it sees fit. This price is usually much higher than the production cost.

Pharmaceutical companies which produce generic copies of existing medicines do not incur the high initial research and development costs. Their medicines still need to be licensed in the countries where they are supplied, but this is not such an expensive process if the same medicine has already been licensed by another drug company. Most medicines cost a lot less to produce and market than they sell for, but the margins on generic medicines are usually much lower. Generic suppliers can undercut the more expensive brands, but their profit margins tend to be lower.

How much tadalafil can I order?

Is tadalafil available 'over the counter'?

Didn't work for me! May for others.

OK but not amazing. Had better of same tablet.

It works exactly as described with no side effects

I find these 20mg tablets effective and seem to remain active for at least a 24 hour period.