Champix out of stock - national stock availability issues. We apologise for any inconvenience.

Champix tablets (varenicline) help to stop smoking permanently by counteracting the addiction and reducing the craving to smoke. Available to buy online from Dr Fox Pharmacy. 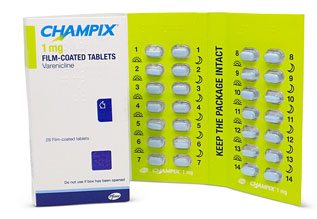 How to order Champix online for UK delivery:

Champix (varenicline) mimics the effects of nicotine and blocks its pleasurable effects. A person taking Champix will find it easier to stop smoking and will be less tempted by cigarettes. In some ways Champix replaces nicotine during the time when a smoker is giving up.

How to take Champix

Champix tablets are started two weeks before the 'quit date'. There is a starter pack which allows the dose of Champix to be built up slowly over 2 weeks to reach a dose of one 1mg tablet twice a day. Two weeks after starting Champix smoking is stopped. Champix is then continued at a dose of 1mg twice daily for 12 weeks. After 12 weeks treatment is stopped, by which time smokers should have given-up and kicked the habit permanently.

Some people, who do not manage to give up, and start smoking again, can try Champix again and can take it for longer (up to 24 weeks). If the usual dose of 1mg twice daily is too strong, and not tolerated, a lower dose of 0.5mg twice daily may be prescribed.

If a person starts smoking whilst they are taking Champix, the course of treatment has failed, and they should stop treatment. It is not harmful to continue with Champix, but the attempt to quit has failed.

If extra Champix tablets are taken in error, seek medical advice. If a dose or doses are missed, do NOT make up the missed dose by taking extra, but resume at the normal daily dose.

Champix can be taken with or without food. Tablets should be swallowed whole.

Champix has been associated in some people with depression, suicidal ideation, behaviour changes and suicide attempts. People taking Champix who develop agitation, depressed mood, changes in behaviour that are of concern to themselves, or their family and friends, or doctor, or develop suicidal thoughts or behaviours, should stop treatment and contact a doctor immediately. For further details see the Champix patient information leaflet.

Depression, increased irritability, sleep disturbance and an urge to smoke can occur when Champix is stopped. If this occurs, a doctor may recommend reducing the dose of Champix slowly before stopping completely.

Champix should not normally be taken whilst pregnant or breastfeeding, although studies suggest smoking in pregnancy is more harmful than taking Champix in pregnancy. Nicotine replacement treatment may be preferable in pregnancy. These issues should be discussed with a midwife or doctor.

Champix may produce dizziness and sleepiness. If affected in this way, do not drive, operate complex machinery.

Dr Fox stop smoking consultations include checks for suitability. Some people, usually only those with pre-existing heart problems, may experience cardiovascular symptoms. Stop Champix and seek emergency medical help in the event of angina, heart attack, or stroke symptoms, all of which would be very rare. Champix is not usually suitable for people who have a history of seizures or epilepsy. Champix is for use by adults only, not under 18s.

Other medicines and Champix

Other stop-smoking medicines may interact with Champix, most notably nicotine replacement products, and these should not be used at the same time.

Side effects of Champix

Most people can take Champix without significant side effects, however some side effects are not unusual.

The most common side effects, affecting more than 1 in 10 are:

Other common side effects, which may affect up to 1 in 10 people include:

Other side effects are less common. For more detail about Champix side effects, see the patient information leaflet.

How effective is Champix?

The clinical study data shows people taking Champix for 12 weeks are twice as likely to stop permanently. About 1 in 5 people succeed compared with about 1 in 10 who try to stop without treatment.

How does Champix work?

The active ingredient is varenicline which blocks the pleasurable effects of smoking and at the same time reduces cravings. It does this by attaching to and blocking nicotine receptors in the brain.

Why do I need to start treatment 2 weeks before my stop date?

When you stop smoking there needs to be enough Champix in your system to prevent craving and block the pleasurable effects of nicotine. It takes two weeks to build up Champix levels.

Why is there a low dose 0.5mg tablet and a standard dose 1mg tablet?

Some people find the standard strength 1mg tablets too strong and do better with the lower strength 0.5mg tablets. After the initial 2 week build up, most people take a 1mg tablet twice daily for 12 weeks, which can be reduced to 0.5mg twice daily for those who experience troublesome side effects. See list of side effects in the patient information leaflet supplied with tablets.

How long should I take Champix?

Why do I need a starter pack?

Champix is started at a low dose and built-up over the first two weeks. The starter pack contains the necessary tablets and instructions for the initial two weeks.

Will Champix work if I smoke while I take it?

Smoking should be stopped completely after the initial two week build-up period. Most people who smoke and take Champix at the same time are likely to fail. However, people who have failed to stop with a 12 week course could try again with reduced smoking during the first 12 weeks and stopping completely whilst continuing treatment for a further 12 weeks.

Should I stop Champix if I feel nervous and depressed?

Some people, particularly those with a tendency towards these symptoms, experience these side effects. These symptoms can even be triggered in people who are not prone to them. If you feel nervous or depressed, stop treatment and consult a doctor. See list of side effects in the patient information leaflet supplied with tablets.

Can I take a course of Champix more than once?

Yes, if you go back to smoking or don't manage to give up the first time, a repeat course may be effective. Stopping smoking is not easy, and it is not unusual to need more than one attempt to quit. You should leave at least a few weeks, and six months or more is sometimes recommended, between courses and should think about how to make your next attempt more successful. A longer course of Champix, 24 weeks, instead of 12 is sometimes more effective.

What should I do if I feel over emotional and low after stopping treatment?

You should consult a doctor. In rare cases these symptoms can be severe. Occasionally a slow tapering off of dose at the end of course of Champix will reduce these types of withdrawal symptoms.

Can everyone take Champix?

Caution should be applied when taking any medicine whilst pregnant or breastfeeding. Studies have not shown Champix to be harmful in pregnancy or in breastfeeding. Risks are likely to be low, but cannot be entirely excluded.

How can I improve my chances of quitting?

Set a quit date and stick to it. Remove all triggers to smoking and avoid situations in which you would normally have smoked. Seek the support of family and friends. Keep in mind the amount of money you are saving. Keep busy and active. Talk to your GP surgery as they may have support services. Be prepared to deal with temptation. If you fail, try again. Don't go back to smoking after successfully stopping. Telling yourself 'I will just have one' is a mistake.

Can I use nicotine substitutes and Champix at the same time?

No. Champix blocks nicotine receptors. Nicotine substitutes such as gum, patches, or vaporisers will be ineffective and counterproductive.

Products are very easy to order after the medical questionnaire & delivery was fast. Very good service. Thank you!