Are you considering Vaniqa? Worried about unwanted facial hair? Confused about your options? Read on and find out the answers to all your questions. 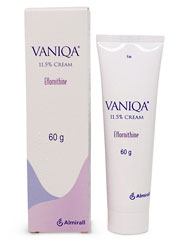 Vaniqa is a brand-name medical cream which is used to treat unwanted hair on the face. It is for use by women only. As a cream, it is applied directly to the skin on the face at the site of the unwanted hair.

How does Vaniqa work?

Vaniqa contains a drug called eflornithine. Eflornithine blocks the action of an enzyme called ornithine decarboxylase, which is found within the hair follicles. Blocking this enzyme results in slower hair growth.

What are the constituents of Vaniqa?

Vaniqa is a medical product. It is a cream for application to the skin, which contains the active ingredient eflornithine. The cream also contains:

Why have I got unwanted hair on my face and neck?

It is understandably upsetting to live with unwanted hair on your face and neck. This is known as 'hirsutism'. It is actually very common, affecting 4-11% of women.

Hirsutism has a genetic tendency, and tends to run in families. It is also more common in women from South Asia, the Middle East or the Mediterranean.

Hirsutism means excessive hair growth in women. However in hirsutism, the hair grows characteristically in a male pattern distribution - in the beard area of the face and neck, but sometimes also on the tummy, lower back and thighs.

Unwanted facial hair is most likely due to an imbalance of female and male hormones in your body, and the most common cause of this is Polycystic Ovary Syndrome. Acne and hirsutism are generally attributed to a relative excess of the male hormone testosterone.

If you have troublesome facial and neck hair you should have a consultation with a doctor. There may sometimes be an underlying medical condition which requires treatment.

Which medical conditions can cause hirsutism?

Most hirsutism in premenopausal women is linked to Polycystic Ovary Syndrome (PCOS) or obesity.

Other causes of hirsutism however include:

Sometimes no underlying reason for hirsutism is found and the cause is either genetic or it is called 'idiopathic hirsutism'.

What endocrine conditions cause hirsutism?

Endocrine conditions are abnormalities affecting the glands inside your body - notably the ovaries, adrenal, thyroid, and pituitary glands. Tumours or overactivity of any of these glands may produce hormones which can cause hirsutism.

What is Polycystic Ovarian Syndrome (PCOS)?

Polycystic Ovarian Syndrome is a common gynaecological condition affecting 1 in 5 women in the UK.

Women with PCOS women have large numbers of tiny follicles in their ovaries. The follicles are the little sacs in which the eggs develop. However in PCOS, these sacs do not function properly, and do not ripen around the time of ovulation and are also unable to release the egg. This is not dangerous, but may result in a variety of symptoms.

Most commonly women with PCOS have altered monthly cycles, or sometimes no periods at all, infertility and other symptoms/signs relating to relatively high levels of male hormones – known as androgens - such as unwanted hair on the face and neck, hair thinning on the head, and greasy skin/acne.

Women with PCOS frequently also have difficulty responding to the hormone insulin. This means they don't break down carbohydrates within their bodies very efficiently, and hence tend to be overweight and have trouble losing weight. There is an association between PCOS and glucose intolerance/diabetes.

If you have PCOS, it is important to get good advice and support about managing the condition.

Do side effects of medication cause hirsutism?

Rarely excessive facial hair growth can be linked with ongoing medication. It is occasionally a problem when taking long term minoxidil, ciclosporin, steroids, or phenytoin.

Which tests do I need for hirsutism?

If unwanted facial hair is a problem to you, it is best to discuss it with a doctor. If the following applies, they may suggest that you do not need any tests at all:

However if tests are needed, these may include:

Vaniqa is a good choice for women with hirsutism because:

What other options are there for treating hirsutism?

It is always important to consider and treat any possible underlying cause for hirsutism.

For example, if you have PCOS, managing this appropriately is likely to improve symptoms. Weight loss for PCOS sufferers is very important. Heavier women tend to have higher levels of steroid hormones including testosterone. It is very important that you see your doctor, and get good advice and support about managing your PCOS, including help with weight loss/weight management.

As Vaniqa works at the level of the hair follicle it can be safely continued alongside any other treatment.

In extreme cases, a woman may be referred to an endocrinologist who may, after investigation, prescribe spironolactone (a heart failure drug which can help with hirsutism) or other androgen blockers.

Who benefits from Vaniqa?

Vaniqa is a local treatment - a skin cream - to treat hirsutism, and hence it is an ideal treatment for women who:

Vaniqa is an effective treatment for hirsutism. It reduces the amount of unwanted hair, and also results in changes to the appearance of the hair, so that individual hairs are paler, shorter, and weaker. In clinical studies, Vaniqa users also demonstrated a significantly reduced psychological discomfort with the condition while using the treatment.

Can Vaniqa be used by men?

No. Vaniqa is licensed only to treat unwanted facial hair in women.

Can you use Vaniqa anywhere - or just on the face and under the chin?

Vaniqa has only been studied for use on the face and chin. It is not recommended to use it elsewhere on the body.

How do you use Vaniqa?

Can you use too much Vaniqa?

Try to use a thin layer of cream only. Using extra will not give better results and it is expensive - so use sparingly!

If you inadvertently swallow Vaniqa by mouth, you are strongly advised to telephone 111 or visit NHS 111 online if in the UK.

Is it dangerous to use Vaniqa long term?

Vaniqa is only effective while you are using it, so for the best results this should be considered a long term treatment.

Long term studies about the safety of Vaniqa are lacking. However, this is not an uncommon situation as clinical studies are usually short term because they are time consuming and expensive to run. As Vaniqa is a topical (local) treatment, only small amounts of the active ingredient eflornithine get into your blood stream. Many women have used Vaniqa safely for years with benefit.

Can you be allergic to Vaniqa?

Allergy to Vaniqa is very rare but if you have known allergies to skin cream ingredients then carefully check the list of other ingredients in the patient information leaflet.

What are the most common side effects of Vaniqa?

Side effects from Vaniqa have been reported in clinical trials. It is important to note that some of these side effects are also reported in patients using placebo (dummy) preparations, and it is not always possible to be sure if there is a causative effect from Vaniqa itself.

The following side effects have been reported. This list is not exhaustive:

Other potential side effects are listed in the patient information leaflet.

Can children use Vaniqa?

Vaniqa is only licensed for use in adults aged 18 or over.

How long should a tube of Vaniqa last?

One 60gm tube should last for 2 months. Do not use Vaniqa if it is more than 6 months since the tube was first opened.

Can I get Vaniqa on the NHS?

There are 'Prescribing Guidelines' for Vaniqa issued by the different regional CCGs/health boards. These guidelines usually state that Vaniqa should be reserved for women for whom alternative treatments are contraindicated, inappropriate, or have failed.

One of the reasons for restricting the prescription of Vaniqa is that clinical experience shows that two thirds of women who are prescribed Vaniqa discontinue treatment. This is because they felt Vaniqa was ineffective, or because of side effects.

If you choose to try Vaniqa, it is important to use it exactly as recommended by the manufacturer and to continue for 4 months before making a decision about effectiveness of the treatment.

Will Vaniqa interfere with my contraceptive pill, or any other contraception?

No. Because Vaniqa is a local treatment only, it will not affect your contraceptive pill. It is important to wash hands thoroughly after applying Vaniqa before handling a condom as the cream could damage a latex condom.

Can I use Vaniqa if I am pregnant or breastfeeding?

It is not advisable to use Vaniqa whilst pregnant or breastfeeding.

How long after starting Vaniqa should I see a benefit?

It may take 8 weeks or longer to see any benefit from Vaniqa. A 4-month trial of treatment is recommended. After 4 months, if there is no improvement, you should stop using Vaniqa.

Do any drugs/medicines interfere with Vaniqa?

No drug interaction studies have been undertaken, so this is unknown. However as this is a local treatment and only small amounts are absorbed into the body, drug interactions are very unlikely.

Where can I obtain Vaniqa?

Vaniqa is a prescription-only drug. This means you need a doctor's prescription to obtain it.

To obtain Vaniqa you therefore have the following options:

Is there a cheaper generic version of Vaniqa?

Vaniqa is a brand name authorised for exclusive marketing (patented) in the UK and EU in March 2001. Patents usually expire after 20 years or so, but at present (November 2021) there is still no generic version licensed for sale in the UK.

How to order Vaniqa