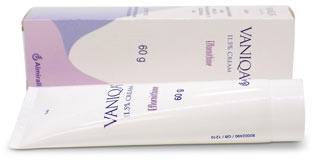 How to order Vaniqa cream online for UK delivery:

How does Vaniqa work?

Vaniqa is not a hair remover, but works by reducing new hair growth and regrowth. Vaniqa works at the level of hair follicles by reducing the activity of an enzyme (ornithine decarboxylase) involved in hair growth.

All women have some male hormone (androgen) as well as female hormone (oestrogen) in their system. Female facial hair or hirsutism in women is caused by an androgen effect on hair follicles either by too much circulating male hormone or by an increased hormone sensitivity in the hair follicles themselves. Hirsutism may be a family trait. It is more often found in women of South Asian and Southern European ethnicity.

It can also be caused by medical conditions, most commonly Polycystic ovary syndrome (PCOS), but also other rare hormone conditions or tumours. Increased facial hair can be a result of hormone changes at the menopause. It can also be a rare side effect of some prescription medicines.

It is important that women who are considering using Vaniqa for facial hair have first consulted with their own GP who may choose to arrange blood tests to check for medical causes. An underlying medical condition is more likely in the following cases:

Who will benefit from Vaniqa?

Vaniqa can be used by all women over 18 who are troubled by excessive facial hair growth. It does not work for hair in other parts of the body.

In the drug trials 70% of women saw improvement after 24 weeks use.

Who is not suitable to use Vaniqa

The Dr Fox online consultation carries out checks for suitability. If you have severe kidney or liver disease, the manufacturers recommend that you discuss with your doctor before using Vaniqa, although there are no documented problems.

Skin preparations which may irritate the skin, like some acne treatments, should not usually be used at the same time as Vaniqa - discuss with your GP.

How to use Vaniqa

If a substantial amount of Vaniqa is accidentally swallowed, consult a doctor or use the NHS 111 service.

How effective is Vaniqa?

Vaniqa does not remove existing hair. It slows down new growth and regrowth. Hair removal, for example by plucking or shaving, should be continued.

It can take up to 8 weeks for results. If after 4 months there is no improvement, Vaniqa should be stopped and a doctor consulted.

Vaniqa's effects wear off after 8 weeks of stopping treatment. To maintain the effect, Vaniqa must be used continuously.

Side effects of Vaniqa

Side effects, if they occur, usually only affect the skin at the site where the cream is applied, and usually settle once treatment is discontinued.

A full list can be found in the manufacturer's Patient Information Leaflet.

Do any drugs/medicines interfere with Vaniqa?

No drug interaction studies have been undertaken, so this is unknown. However as Vaniqa is a local treatment and only small amounts are absorbed into the body, drug interactions are very unlikely. Vaniqa will not affect your contraception.

Do not use Vaniqa if you are pregnant or breastfeeding. Alternative treatments should be used.

Vaniqa is the only cream with a direct action that reduces growth of unwanted female facial hair. It is only manufactured by Almirall and there is no cheaper generic alternative available.

As female facial hair is usually linked with excess male hormone (androgen), most other treatments work by reducing the amount of androgen activity in the body.

In obese women, significant weight loss will reduce the levels of androgens and can therefore help to reduce unwanted facial hair.

How else to manage facial hair

Electrolysis, Laser, and Intense pulsed light (IPL) are all methods of permanently destroying the hair follicle and stopping hair growth. They are not usually provided on the NHS. It is important to use a fully registered practitioner. Potential side effects can include scarring.

Can Vaniqa also be used by men?

No. Vaniqa is only for unwanted facial hair in women.

Can you use Vaniqa anywhere - or just on the face and chin?

Vaniqa has only been studied for use on the face and chin. It is not recommended for use elsewhere on the body.

Can you use too much Vaniqa?

Use a thin layer of cream twice a day. Using extra will not give better results and it is expensive so use sparingly!

Can I use Vaniqa long term?

Vaniqa is only effective while you are using it, so it should be considered a long-term treatment. There is no data to suggest that it causes damage when used long term and it has been available in the UK for nearly 20 years.

Does what it says

I saw an immediate effect, it hasn't stopped growth but slowed significantly

Takes time but worth it!