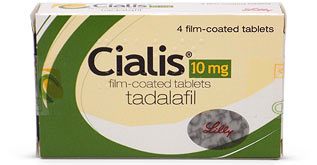 How to order Cialis online for UK delivery:

Cialis lost its exclusive patent in the UK in November 2017 and is now available legally in the UK under the name tadalafil. ‘Cialis’ is a brand name, ‘tadalafil’ is the medical name.

Generic tadalafil is available at much lower cost, from 50p per tablet.

Cialis from Lilly pharmaceutical company is sometimes known as The Weekend Pill due to its 36-hour duration of action.

It has been licensed in the UK since 2003. It was the second erectile dysfunction (ED) prescription medication of its type to receive a UK license, after Viagra (sildenafil). Its prolonged effectiveness and the option to take a low dose daily tablet have led to Cialis becoming increasingly popular and being more widely prescribed.

The patent for Cialis expired in the UK on 14 November 2017, allowing other drug manufacturers to legally make and sell generic versions (marketed as tadalafil). Generic medicines are medically identical to branded originals and are usually much lower cost.

Most men take Cialis as and when they need it, usually 10mg or 20mg, which is effective for up to 36 hours.

What does it do?

Cialis contains tadalafil which is known medically as a PDE5 inhibitor. Tadalafil inhibits the PDE5 enzyme which is involved in regulating blood flow in the penis during erections. Sexual stimulation is required before the medication will work - without stimulation it will have no effect. Cialis augments and supports sexual performance and relationships.

Why do men get erectile dysfunction?

A range of factors contribute to erectile dysfunction, including lifestyle choices, mental state, chronic disease, injuries, and operations. Emotional problems, such as stress and performance anxiety, can have an impact on both erectile performance and sexual desire. Occasional treatment with a PDE5 inhibitor such as Cialis can be effective in breaking a cycle of anxiety and failure. Lifestyle factors, such as smoking, non-prescription drug use, excessive drinking, and even obesity can have an effect. Erectile dysfunction is sometimes a symptom of underlying health problems such as diabetes, atherosclerosis, and heart disease, amongst others.

Men suffering from erectile dysfunction should inform their GP who will undertake an assessment, possibly perform tests, and provide advice.

Cialis benefits from having a long duration of action. Viagra remains active for about 4 hours, Levitra for 4-5 hours, and Cialis for 36 hours – hence its familiar name 'The Weekend Pill'. Erections will not be continuous during 36 hours after taking Cialis, occurring only at times of arousal during those 36 hours.

Viagra (sildenafil), Levitra (vardenafil), and Spedra (avanafil) are alternative tablet treatments for erectile dysfunction and are also available to buy in various strengths and pack sizes after completing the same medical consultation.

Taking Cialis for the first time

There are four strengths: 2.5mg, 5mg, 10mg, and 20mg. The lower doses of 2.5mg and 5mg are primarily for regular daily use, although the 5mg strength can be taken on an as required basis by men who respond well to one-off lower doses.

The usual starting dose is 10mg taken at least 30 minutes before sexual activity. If this dose is highly effective, subsequent doses could be reduced to 5mg on a trial basis. If repeated trials of a 10mg dose prove ineffective, the dose can be increased to 20mg.

There is no benefit in taking a higher dose than is needed. Repeated trials of treatment at one dose are recommended before changing to higher or lower strength tablets.

Recommended starting dose for most men taking it for the first time.

Does it work every time?

Response to treatment is usually predictable and consistent. On most occasions, if Cialis has worked before, it will work again.

Some causes of erectile dysfunction, such as physical injuries or nerve damage, are more resistant to tablet treatments and may require other therapies, such as injections or penile implants.

All men who are troubled by erectile dysfunction, which can be a distressing problem, should consult a doctor for a full assessment and advice.

Most men do not experience significant side effects. A full list of the most frequent side effects can be found in the manufacturer's patient information leaflet supplied with tablets (links below).

Some men experience a bluish or yellowish tinge to their vision after taking Cialis. This is not dangerous and fades after a few hours. This is a possible side effect of all ED drugs (PDE5 inhibitors).

On very rare occasions ED treatment produces prolonged and painful erections, in a condition known as priapism. Priapism is a medical emergency with the potential on rare occasions for irreversible injury to the penis. If an erection lasts for more than 2 hours, medical attention should be sought immediately.

When not to take Cialis

During an assessment on the Dr Fox website, men are required to complete an erectile dysfunction questionnaire. This determines if treatment is suitable. Men should not take Cialis without further assessment from their GP if any of the following apply:

Dr Fox cannot supply treatment to men where the above are present.

Cialis should not be taken at the same time or within 36 hours of taking Viagra/sildenafil, Levitra/vardenafil, or Spedra/avanafil.

Why should I see a doctor face-to-face before starting ED treatment?

ED can be a sign of an underlying medical condition such as diabetes, raised blood pressure, or high cholesterol. An examination is required and tests may be needed. These cannot be carried out online. It is fine to obtain repeat supplies of Cialis online, but only after an initial diagnosis and assessment.

Is Cialis suitable for all men?

Cialis, along with the other commonly used ED tablets are usually effective and well tolerated medication. Most men are able to take them and they usually work well. However, men taking some prescription medicines, most notably drugs called nitrates used to treat heart disease, but also some other prescription medicines, should not take Cialis. Men who have some medical conditions, particularly those affecting exercise tolerance should also not take Cialis. Always consult your regular doctor before starting erectile dysfunction medication. Online doctors carry out checks through online questionnaires, but this does not replace initial face-to-face assessments and regular medical check-ups are necessary.

What is the difference between Cialis and Viagra?

They are similar in that they treat ED in the same way by altering blood flow in the penis and are both classed medically as PDE5 inhibitors. They differ in their duration of action. Viagra remains active for about 4 hours after taking a tablet and Cialis for about 36 hours.

Why is Cialis sometimes called the 'weekend pill'?

A 10mg or 20mg tablet taken on Friday evening will usually remain active through a whole weekend until Sunday morning, hence the name.

Why do some men take Cialis every day?

Most men take it occasionally, up to a maximum of 2 or 3 tablets per week. They take a tablet if they expect to be sexually active in the following 36 hours. Men who regularly require Cialis more than twice a week sometimes prefer to take a lower dose 2.5mg or 5mg tablet each day, at the same time of day. These low dose tablets are specifically for daily use and provide a continuous level of treatment.

Is Cialis stronger than Viagra and Levitra?

No, the duration of action is longer, 36 hours for Cialis compared with 4-5 hours for Levitra and 4 hours for Viagra, however most men find that during this active period the treatments are equally effective when equivalent strength tablets are used. The lower strength of each is Cialis 10mg, Levitra 5mg, and Viagra 25mg and the upper doses 20mg, 20mg, and 100mg respectively. Some men find one type of tablet works better for them than another, but this is not usually the case.

Is there a lower cost generic version of Cialis?

Yes. Cialis was under patent by the drug company which developed it, Eli Lilly until 14 November 2017. Dr Fox pharmacy can now offer UK licensed generic tadalafil at significantly lower cost.

Who can legally supply Cialis in the UK?

Why do the prices of Cialis vary?

Can I get Cialis on the NHS?

Generic Cialis (tadalafil) is available on the NHS but there are limits on the amount which can be prescribed, usually 1 dose per week - NHS prescription fees apply. Original branded Cialis is not available on the NHS, except in special circumstances.

Can I get Cialis on a private prescription from my doctor?

Can Cialis tablets be divided and taken in parts?

No, Cialis tablets are film coated and are intended to be swallowed whole. Cutting up the tablets will reduce their effectiveness.

Why should Cialis not be taken with recreational or illegal drugs?

People who take illegal drugs are likely to engage in risky sexual practices and this likelihood is increased when ED treatments are taken at the same time. There is also an increase in side effects, such as changes in vision and changes in blood pressure. Cialis combined with cocaine and other recreational drugs may lead to the rare but dangerous condition of priapism in which a prolonged erection of more than an hour or two can cause permanent damage to the erectile tissues. See Beware club drugs and Viagra.

Is ED counselling better than tablets?

This depends - ED increases with age, affecting up to 40% of men by the age of 50. In many men there is no significant psychological cause and counselling is likely to be ineffective. In other men stress, relationship difficulties, and psychosexual factors play a role and counselling may be preferable. Sometimes a combination of medication and counselling works best.

Use to be really good, but this is my 2nd order that just haven't been as affective. Have they changed the product? Very disappointed

Dr Fox response:
Thank you for your review and sorry to hear the Cialis was not effective for you. There has been no change to original branded Cialis - it is the same as it has always been. Medical advice is available from our doctors if required.

Fantastic!! Never to disappoint! Recommended to anyone and have it again!

Good because it lasts 36 hours