Vitaros cream requires refrigeration and refrigerated transport and is not available from Dr Fox. 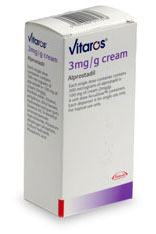 Erectile dysfunction (ED) is common, affecting up to 4 out of 10 men over 40. There is a complex mix of physical and psychological factors involved in developing an erection and many men have occasional problems getting or maintaining an erection. Anxiety, alcohol, stress, and tiredness can all have a negative effect. Though often checked by doctors, low testosterone levels are not usually the cause of problems. Men who smoke or are overweight are more likely to have difficulties, and ED can also be caused by some medicines and by recreational drug use. ED can be linked to diabetes, high cholesterol, and poor circulation. Frequent cycling of more than 3 hours daily can also have an effect, by directly damaging the nerves to the penis. All men with ED need to tell their GP about it. Tests and treatment for other conditions may be needed as well.

ED is often stressful and can lead to depression and relationship problems. GPs can help with these issues and counselling may be needed.

Vitaros cream is an alternative to taking tablets for erectile dysfunction. Vitaros cream is supplied in a syringe dropper and is applied to the head of the penis 5-30 minutes before sexual activity. The active ingredient, alprostadil, is a prostaglandin which causes increased blood flow to the penis. Alprostadil is absorbed into the skin around the urethra (penis opening) enhancing erections usually for the following 1-2 hours.

In a 12 week study 52% of men reported improved erections when using Vitaros, compared with 20% using a placebo (dummy cream).

Vitaros is not suitable in men who:

How to use Vitaros

Vitaros cream should be brought to room temperature before use, either by removing it from the refrigerator in advance or by rolling the syringe between the hands to warm it.

Vitaros cream is applied to the head of the penis using the syringe dropper as described in the manufacturer's patient information leaflet. Correct technique for use is important.

A single dose applicator delivers 300mcg of alprostadil in 100mg (a few drops) of cream. Vitaros is supplied in packs of four.

Vitaros should NOT be used more than once in 24 hours and NOT more than 2-3 times weekly. More frequent use risks increased side effects, particularly irritation and soreness.

Vitaros and other medicines

Vitaros should NOT be used with other injectable or locally applied ED treatments such as Caverjet or Muse. They contain the same active ingredient, alprostadil, and there would be an increased risk of Priapism. It should not be used with ED tablets.

Possible side effects of Vitaros

Men who experience side effects with the commonly used tablet treatments for erectile dysfunction may find Vitaros an effective alternative.

Very little of the active ingredient (alprostadil) is absorbed into the circulation. The cream works directly by contact with the skin of the penis. There are unlikely to be significant generalised side effects.

Common side effects (affecting more than 1 in 10 patients):

Vitaros can increase dizziness or fainting. Do not drive or operate machinery within 1-2 hours after administration.

Viagra-type tablets from the class of PDE-5 inhibitor drugs are convenient and work well for many men and are available from Dr Fox. For other treatments, men need to consult a urology specialist. These can include vacuum pump devices, penile injections, or intra urethral (through the penile opening) applications of alprostadil, and surgical devices which can be implanted in the penis. Your regular doctor may also recommend counselling.

“Affordable prices.Easy to navigate website, lots of options to choose from, quick service and discreet delivery. Thank you”05 April 2022 – Anonymous

“Dr Fox provides a very professional and well organised service. Responds quickly to questions and updated my details almost immediately when I made an error creating my account. My order was updated throughout until receipt.”05 April 2022 – Anonymous