February 2019: Public Health England’s antimicrobial prescribing guidance no longer recommends fluoroquinolones (ciprofloxacin) for standby treatment of travellers’ diarrhoea, due to increasing resistance to these antibiotics in some parts of the world.

National Institute of Health and Care Excellence (NICE) and Public Health England recommends standby azithromycin for patients at high risk of severe illness should they develop travellers’ diarrhoea or those visiting high-risk areas.

As a result Dr Fox has withdrawn supply of ciprofloxacin for travellers’ diarrhoea, and provides the recommended alternative azithromycin only.

END_OF_DOCUMENT_TOKEN_TO_BE_REPLACED

Getting rid of the runs: treating travellers’ diarrhoea

Diarrhoea is commonly caused by a bowel infection by a virus, bacteria or parasite. Increased exposure to gastroenteritis-causing factors is why diarrhoea is so common amongst travellers; in fact up to five million Brits suffer from it every year.

It normally begins during the first week after arriving in a new place; trying new foods exposes us to new bacteria that our bodies are not used to. It also puts us at risk of dangerous bacteria such as salmonella and E. Coli, as well as parasites like Giardia and viruses like the norovirus. All of these are transmitted through hand to mouth contact, and eating or drinking contaminated food or water. Diarrhoea can also be caused by eating different foods with higher levels of spice or oil than our normal diet.

If all this has put you off eating or drinking anything in a new country (or even travelling at all!), try to keep in mind that there are things you can do to decrease the severity and length of a diarrhoea episode abroad. END_OF_DOCUMENT_TOKEN_TO_BE_REPLACED 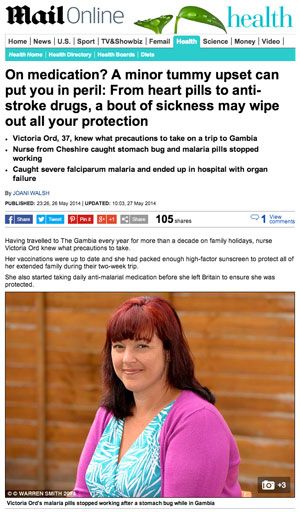 Whether missing one or more of your tablets because of vomiting will lead to serious health problems depends on which tablets and why they are being taken. People taking long term medication who plan to travel for prolonged periods in remote areas should talk to their doctors before they leave. END_OF_DOCUMENT_TOKEN_TO_BE_REPLACED