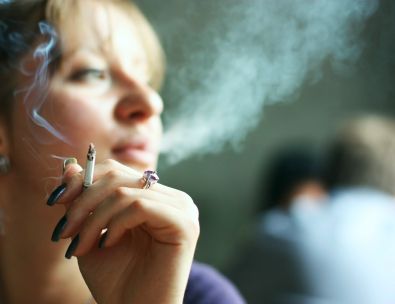 Many people appear to be utterly determined to give up smoking, but when it comes time to do so, it soon becomes apparent just how addictive the nicotine in cigarettes really is. 70% of smokers say they want to stop but feel hopeless about their chances of success. It has even been claimed that nicotine is more addictive than heroin, and although the evidence to support that claim is inconclusive, it can be agreed that nicotine is a highly addictive drug.

According to the NHS, nicotine affects the levels of dopamine and noradrenaline in the brain, creating the enjoyable “nicotine rush” within just seconds of inhaling. The brain then becomes used to the nicotine and develops a tolerance for it, therefore requiring more to achieve the same results.

How can smokers quit successfully?

Smokers who feel they are in real need of help in order to beat their addiction can seek assistance from NHS Stop Smoking Services or their GP. This complete support includes one-to-one or group advisory services, assessment to determine the level of addiction the person is facing, and prescription of stop smoking treatments to help curb cravings and ease the effects of the chemical withdrawals.

It may sound like a lot of hard work, but it’s worth it – there are a number of beneficial changes the body experiences almost immediately after stopping smoking. According to NHS Smokefree:

In just a short amount of time, senses of taste and smell are improved, energy levels increase, and the appearance of skin and teeth improve, among other noticeable benefits. It decreases stress, increases fertility, leads to better sex, and decreases men’s chances of suffering from erectile dysfunction.

As time goes on, the effects of smoking continue to wear off and the person experiences further significant health benefits:

Stopping smoking also has significant benefits for family and friends, who will no longer be exposed to second-hand smoke, and also saves the average person up to £2,000 per year in cigarettes.

In terms of withdrawal symptoms, those who are trying to quit smoking do experience physical and mental changes. Strong cravings for nicotine can lead to the following, as well as a range of other sensations.

These effects tend to be short-lived, however, as the body becomes less dependent on nicotine. There are also a number of ways people can reduce the effects of nicotine withdrawal, including nicotine replacement therapy and stop smoking medication, which affects and satisfies the nicotine receptors in the brain.

What about weight gain?

It is true that many people put on weight after they stop smoking due to a less suppressed appetite, slower metabolism (nicotine speeds up metabolism), substituting food for cigarettes, or using food to satisfy the habit of moving hand to mouth.

In the long run, however, the average weight gain for smokers who quit is only approximately 3-4kg. Experts agree that the health benefits of stopping smoking far outweigh the risk of weight gain. Exercise is also recommended as a good way to curb cravings, so with the right mindset one can easily prevent weight gain from becoming detrimental and even use exercise to their advantage throughout the stopping process.

To avoid gaining weight, ex-smokers can keep low-calorie snacks on hand and remain as active as possible, remaining conscious of the fact that stopping smoking often coincides with moderate weight gain.

Though it is widely believed that smoking helps with stress, studies show that those who stop often experience much less stress than in the past. It is the nicotine withdrawal that makes habitual smokers feel stressed when they have not had a cigarette, and the satisfying of that craving is only temporary.

As oxygen levels return to normal, ex-smokers can experience improved mental wellbeing and an enhanced ability to concentrate.

With a realistic idea of what to expect when they stop smoking, people can make an informed decision as to how they will go about it, keeping in mind that having professional support and using stop smoking medication help create the best recipe for success.