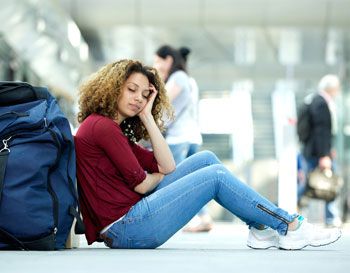 Frequent travelers are all too familiar with the feeling of jet lag; the extreme fatigue, insomnia at night, digestion problems and trouble concentrating on simple tasks. Whether you are a first time flyer, or about to embark on your first long haul flight, jet lag and its effects on your body can come as a bit of a shock.

With the introduction of cheaper flights and the newly increased popularity of travelling to areas of Eastern Asia, such as Thailand, more and more Brits are embarking on long distance holidays.

Whilst there is no way to fully prevent the effects of jet lag, there are many simple approaches to long distance travelling which can help relieve the symptoms and make your journey more pleasant.

What is jet lag?

Jet lag is the name given to the temporary sleep disorder that occurs when we cross two or more time zones. The more time zones you travel through the stronger the effects, and the longer they will last.

For many years jet lag was deemed a state of mind, however in recent years, studies have shown that flying through numerous time zones will imbalance our natural biological clock.

Our bodies work on 24 hour cycles called circadian rhythms. These rhythms are measured by distinct rises and falls in body temperature, plasma levels of certain hormones such as Melatonin and other biological factors, all of which are effected by our exposure to sunlight – which helps to determine when we sleep and wake.

When travelling to a new time zone our circadian rhythms can take a while to adjust, meaning our bodies continue to work to our “normal” biological schedule for several days. This, in turn, causes our bodies to tell us to sleep and wake at the incorrect times, for example; wanting to sleep in the middle of the afternoon and struggling to fall asleep in the evenings.

How jet lagged you feel not only depends on how many time zones you travel through, but also whether you’re travelling East or West. If you’re flying east you can expect jet lag to last a longer amount of time than if you were travelling to the west. A 10 hour flight to the east through nine time zones could take you up to eight days to recover from – which for most people is the entire holiday! Finding solutions to relieve the symptoms of jet lag is often essential to the quality of your holiday.

From medication to changing your sleeping pattern before you leave for your holiday, there is a whole range of techniques to help you combat jet lag and make the most of your trip away.

How does melatonin work to combat jet lag?

The body produces a natural hormone called melatonin, which helps to regulate when we fall asleep and when we wake. By taking a melatonin substitute before you want to sleep (often at around 10pm local time) you can boost your body’s level of melatonin, helping you to fall asleep.

Melatonin should not be taken for more than five consecutive days, and should be avoided during the day time as it can cause drowsiness and may affect your driving. Like all medications, melatonin has a range of side effects, most of which do not occur in most people. They include; headaches, sore throat and backache.

Melatonin is not suitable for pregnant or breast feeding women, those who suffer with liver disease and people already taking sedatives or the antidepressant fluvoxamine.

If you’re heading on a long haul holiday this summer Melatonin can make all the difference to the quality of your trip.