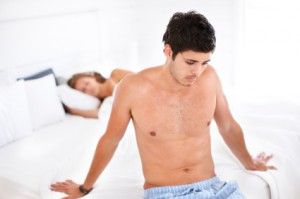 If you do think you have erectile dysfunction, no matter what age you are, the most important thing to do is to see your GP. This is because the condition can be a symptom of other issues, such as diabetes. It could also be caused by something in your lifestyle, such as excessive consumption of alcohol. Your doctor will check your history to see what might be causing your problems.

However, in many younger men, the cause of erectile dysfunction isn’t medical at all. Very often, the cause of it is performance anxiety. This is a psychological issue that needs to be taken seriously, as the feelings of anxiety can often be deep rooted and need to be dealt with.

You might think that the answer would be to take a drug such as Viagra, but when the problem is nothing to do with a physical issue, drugs tend not to have the effect you might have been hoping for. There are lots of reasons men suffer from performance anxiety. It might be a lack of confidence, feelings of inexperience, previous experiences that continue to affect you now, a feeling of pressure that is hard to overcome, and so on.

Naturally, these sorts of reasons can lead to the fun being taken out of sex – and erectile dysfunction can be the result of that. Rather than using drugs to treat the performance anxiety, something called behaviour modification therapy is often used instead. This can involve the man on his own, or him and his partner if he takes part in couples therapy.

The aim of therapy such as this is to help the man affected by anxiety to enjoy sex again, with a focus on sustaining pleasure rather than the ‘end result’. In many cases, this shift of focus from ejaculation to more sustained pleasure helps men to experience a better erection and start to overcome the performance anxiety that previously affected them.

It’s important to seek support if you are suffering from performance anxiety – it might not be a physical issue, but it is still something that impacts on your well-being and so it’s worth taking seriously so you can resolve the issue as soon as possible.