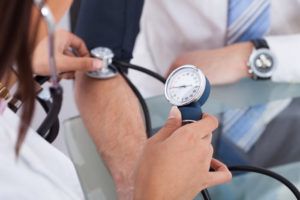 Erectile dysfunction is widely recognised as a quality-of-life issue that affects self-confidence and relationships, but experts agree that erections, or erection problems, can also be a measure of mens’ general wellbeing.

Some go so far as to claim that the penis is the barometer of a man’s health. And though it can be argued that due to the large number of possible causes of erectile dysfunction (ranging from psychological issues to the side effects of medication), a man’s ability to achieve an erection is not always indicative of his overall state of health, a number of studies prove that in otherwise healthy men erectile dysfunction can be an early sign of heart disease.

One study, published by European Urology in 2005, has shown that men with moderate to severe erectile dysfunction was associated with a considerably increased risk for CHD or stroke within 10 years.

A study published in 2009 by the journal Mayo Clinic Proceedings concluded that erectile dysfunction and coronary artery disease may both be manifestations of common underlying vascular problems; it also found that ED in younger men is associated with a significant increase in the risk of future cardiac events. It is widely known that the common cause of heart disease and erectile dysfunction is hardening of the arteries, or atherosclerosis.

The hardening of the arteries begins to affect the smaller arteries of the penis, a very sensitive and vascular organ, before becoming apparent in the larger arteries or causing heart attack or stroke.

So what does this mean for men who suffer from ED? Though it is not cause for panic, erectile dysfunction in healthy men can be symptomatic of heart disease or other illnesses.

The information is useful to patients and medical professionals alike because if a man is diagnosed with erectile dysfunction, further tests to evaluate their cardiovascular health can be done. Healthy lifestyle changes can also help reduce his risk of heart disease in the future. These changes may include stopping smoking, losing weight, exercising more, and dietary changes.

According to the NHS, erectile dysfunction is so strongly associated with cardiovascular disease that it may be one of the first causes your GP considers when making a diagnosis and planning your treatment.

ED occurs when parasympathetic nerves to the penis fail to release sufficient Nitrous oxide (NO), meaning that the process of achieving an erection is also extremely sensitive to neurological disruptions. It can be caused by neurogenic conditions such as Parkinson’s disease, diabetes and multiple sclerosis, or nerve damage to the area. Though these causes are less common they may also be taken into account when an otherwise healthy man suffers from ED.

In conclusion, not only does a man’s general state of health affect his chances of having erectile dysfunction, the inability to achieve an erection can likewise be an indicator of his overall health. The best preventative measures for avoiding ED continue to be related to living a healthy lifestyle, and we can follow the same regimen prescribed for avoiding heart disease: eating a healthy balanced diet, getting plenty of exercise, keeping to a healthy weight, avoiding smoking, reducing alcohol consumption and following doctors’ orders to keep illnesses such as diabetes under control.