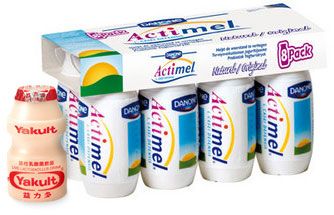 Probiotic products claim to introduce ‘good’ bacteria to the gut (the intestines below the stomach) to help maintain a healthy digestive system. The use of probiotics has grown in recent years with brands such as Yakult and Actimel occupying significant sections of our supermarket shelves – and 60% of British households buy probiotics regularly.

But a recent report published in Beneficial Microbes claims all the leading probiotic brands do not manage to get this good bacteria to the gut alive and flourishing, or in sufficient number – rendering health benefit claims questionable.

They investigated whether products contained as many live bacteria as claimed on their labels, whether the bacteria survived in the stomach and whether they then flourished in the gut.

Four of the eight — Align, Bio Balance, Bio-Kult and Probio7 — failed all of the tests. Yakult, a yogurt drink, contained the amount of bacteria claimed, but failed the other two stages, and its rival Actimel fell short on the number of bacteria surviving in the stomach. The only product to pass all three tests was Symprove, a water-based barley drink. Past studies have suggested probiotics could help with irritable bowel syndrome (IBS) as well as coughs and colds in children and high blood pressure. The probiotic market is estimated to be worth almost £20 billion globally.

Dr Simon Gaisford, the study author, from UCL’s school of pharmacy, said: “I certainly wouldn’t buy a product where nothing seems to be getting through. Just swallowing them is no good if the stomach then kills everything.”

Symprove, Actimel and Yakult all contained at least as many live bacteria as stated on the packaging but all the others contained less than 75 per cent of what they claimed.

Next was a test that involved exposing the products to pig stomach fluids for two hours. Only in Symprove and VSL#3 did healthy numbers of bacteria survive the acidic environment, said the authors. In some products, live bacteria disappeared within five minutes and in Yakult they fell significantly after 10 minutes. When used as advised on the label the products take 30 to 120 minutes to pass through the stomach to the small intestine.

Finally, the scientists looked at whether bacteria could thrive and take hold in the small intestine within 10 hours.

Only Symprove, Actimel and VSL#3 passed. Many of the others took days before they started to flourish, by which point they would already have left the body. 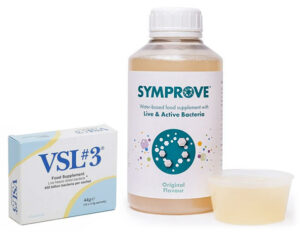 Antibiotics can affect the bacteria in the gut, which is one of the reasons some antibiotics tend to cause diarrhoea. It is said that taking probiotics during and after antibiotics, to replace the good bacteria, may help, although this seems to be unproven, and most doctors would not routinely recommend probiotics with antibiotics.

The clear ‘winners’ of the study’s report were the lesser known brands Symprove, and to a lesser extent VSL-3.

Symprove ‘original’ flavour drink tastes pretty foul, although they do have a mango and passion fruit flavour as well which is better. We have not yet tasted VSL-3 but internet reports suggest it also does not taste very nice. No pain, no gain!