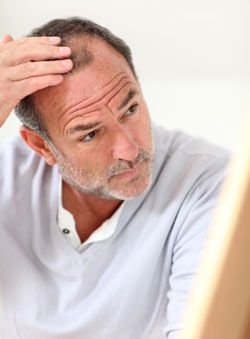 Where does hair loss originate? While there may be environmental factors and even psychological issues that cause thinning and loss of hair, genetics are actually responsible for a majority of cases of alopecia (the scientific term for hair loss). The more information available about the causes of each particular case, the easier it is to determine the right treatment and start down the path.

Which side does hair loss come from?

It is a common belief that if you are a man you need to look at your mother’s father. If he is bald, there is a good chance you will be bald as well. This statement is not entirely wrong but it is an oversimplification. The genes that your maternal grandfather passed on are important in determining if you will suffer from male pattern baldness, however the odds of losing your hair increase if there is a history of hair loss on your father’s side as well. The more people with male pattern baldness on both sides of your family tree, the higher the odds that you will suffer from it as well.

Female pattern baldness does have a genetic component; however it is believed to be less significant than the one found in men. In women it is believed that hair loss is most often caused by an increase in androgens and other hormones or as a result of ageing.

How does it work?

Your genetic material is contained within your chromosomes. They come in pairs, (one from your mother and one from your father). Each cell contains 22 pairs (known as autosomes) that determine your general characteristics. There is also another pair that determines your gender. You will always have an “X” chromosome from your mother’s side. Your father’s genetic material can either provide a “Y” chromosome, resulting in a male gender or another “X” chromosome resulting in a female gender.

Research has shown that the gene most commonly associated with baldness is in the X chromosome which, if you are a man, came from your mother. This has been commonly accepted knowledge for quite some time, however newer research has supplemented this statement and added 11 additional genetic sequences in your autosomes that could also cause hair loss. All of this genetic material interacts to cause male pattern baldness.

Because men only have one “X” chromosome the amount of genetic variations is limited. This increases the risk of baldness in the presence of the right genes.

Research continues and experts in the field are working to achieve a better understanding of the interactions between these genes in order to create new ways to prevent and/or cure hair loss.

Yes. While they won’t change your genetic makeup, both Propecia (finasteride 1mg) tablets and Regaine (minoxidil) can be used to combat hair loss for men with male pattern baldness. They approach the treatment process in different ways, either by interacting with the hormones that could be causing hair loss or by increasing the amount of blood flow to your scalp, promoting the growth of thicker and healthier hair.