In the past, STD awareness campaigns have been mainly aimed at the young. However, recent statistics have shown a dramatic rise in STDs in the over 50s, demonstrating that sexually transmitted diseases are not just a problem for the young, but can affect anyone, at any age.

In many ways, the sheer volume of safe sex advertising aimed at the 16-25 age group seems to have had the reverse effect on the older generation. Many over 50s now feel that this is an issue which no longer affects them.

But while many in this generation might not be aware of the growing problem, the medical community, press and health charities are trying to raise awareness.

Research by the Student British Medical Journal has shown that the number of older people with sexual transmitted diseases, such as gonorrhoea and chlamydia, has doubled in the last ten years.

And if you look at the figures for chlamydia alone, the increase is even more dramatic. The number of cases of chlamydia in the 45-64 age group has risen by three quarters over the last decade.

In addition to this, there has also been an increase in cases of HIV in those aged 50 +. This age group now accounts for 20% of adults seeking medical treatment for HIV, which is an 82% increase on figures from 2001.

A spokeswoman from the FPA voiced her concerns over the rising number of STDs in the older generation when she told The Independent, “The oldest caller to our helpline was an 82-year-old man starting a new relationship. But this also means that STIs in people over 50 are rising fast – and have been for several years.”

Why are STDs rising fast in the over 50s?

There are many reasons for this growing problem, some medical and some which reflect cultural changes in lifestyle and mind-set.

The term ‘Silver Separation’ is often used to describe those that divorce when they reach middle age. Many of the Baby Boomer generation decide to divorce as they reach middle-to-old-age, usually as a result of lifestyle changes such as retirement or ‘empty nest syndrome’.

It is not uncommon for couples to reach middle age, realise that what they used to have in common is no longer there, and consequently decide to separate. But instead of staying in, many people from this generation are now taking the opportunity to travel the world, make new friends and even try out online dating.

However, this new lifestyle has meant that the older generation are having more casual sex than before with one fifth of those 45-64 admitting to having unprotected sex in the last five years with someone other than their long-term partner.

So while this positive approach to life in your older years can be a great thing, it’s important that couples are aware of the potential health risks of a new relationship.

Quite simply, many over 50s no longer consider themselves at risk from contracting an STD. When this generation start dating again, they may remember the thrill from their youth, but not the caution and contraception that went with it.

If you’ve been in a long-term relationship, or have been single for many years, safe sex and condoms simply haven’t been a part of your life for a long time.

In a similar study by the University of Chicago, women were found to be slightly more cautious, but 60% of those aged 58 to 93 still didn’t use a condom when having sex with a new partner.

While the menopause may mean that you no longer need contraception to prevent pregnancy, no matter what your age you’re never immune to STDs. In fact, post-menopausal women are more vulnerable to STDs than younger women because of physical changes.

For men, wearing a condom can become difficult and this may contribute to the reasons why many simply choose not to. If a man struggles to maintain an erection, wearing a condom will exacerbate the problem, as it restricts the blood flow to the penis. One solution to this however is to use female condoms or a different barrier method instead.

What is being done to raise awareness? 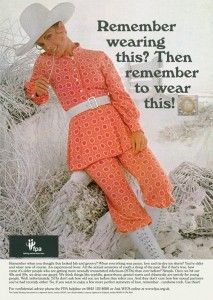 The health charity, the Family Planning Association, started a national campaign in 2010 to raise awareness of the problem with clever yet light-hearted posters. Using fashion adverts from the 60s and 70s, the FPA added the phrase “Remember wearing this?” and then alongside a packaged condom the posters adds, “Then remember to wear this”.

Alongside this campaign and the media coverage, GPs are also being urged to make their patients aware of the risks.

How to reduce the risks

The simplest way to protect yourself against STDs, no matter what your age, is to use condoms. This is the only method of contraception to protect against STDs and while women may no longer be able to get pregnant, both partners are susceptible to sexually transmitted diseases.

If you’re not prepared to wear condoms, but want to have safe sex with a new partner, then the only other option is to discuss it and both gets tested for STDs.

How to get tested

If you’re worried you may have a STD, or if you just want to be sure you’re all clear, then it’s best to get tested. You have several options: you can visit your GP, local sexual health clinic or pharmacy. Or, if you don’t feel comfortable discussing your problem and just want to do a test in the comfort of your own home, you can order a chlamydia test online.

If you’re sexually active and looking to embark on a new relationship, it’s important to get yourself tested for chlamydia. Not only is chlamydia the most common STD, but it’s also symptomless in a large majority of cases, so it’s worth doing a test even if you have no symptoms.

Testing for chlamydia is simple and just involves a urine test, which can be sent to us in the post. If your test comes back positive, you can buy anti-bacterial chlamydia treatment online.

Safe sex for the over-50s

Safe sex is possible, no matter what your age. But more needs to be done to raise awareness of the growing sexual health problems in an ageing population, which is increasingly sexually active. Many, over 50, simply don’t think safe sex applies to their generation and a change in attitude by sexual heath campaigners is needed to demonstrate that any sexually active person, no matter what their age, is at risk of STDs.